Embroidered ceremonial flag for Traffic Police of the Czech Republic 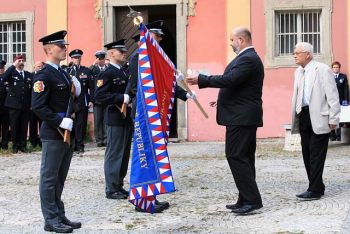 Embroidered police flag was made ​​on the occasion of the 94th anniversary of the traffic police. Interior Minister Martin Pecina participation of the Chief of Police Martin Wormtail, Director of the Traffic Police Tomáš Lerch and other distinguished guests gave the ceremonial Traffic Police flag. The traditional ceremony at the premises of the Police Museum in Prague Charles was the blessing of new standards.

The blog on heraldry