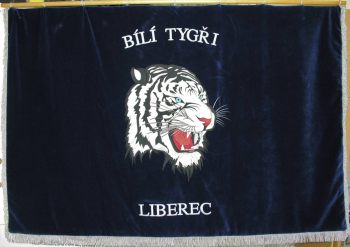 Liberec hockey club with us entered the embroidery of your logo into a white tiger velvet flag. Fully embroidered logo is positioned on a dark blue velvet with silver flagship fringes.

Ice hockey has in the Ještědem great tradition. The first hockey club was established here in 1934 and became its chairman Karel Novotný. First Liberec hockey players competed under the banner of SK Rapid Upper Růžodol.

21st August 2000 was introduced a new logo and a new name, White Tigers Liberec. Along with these changes, the work in the club focused not only on the sports page of its activities, but also to promote the club and especially getting spectators and other supporters and partners to ensure quality sports results, but also appealing entertainment with the participation of a large number of spectators. Even this work during the season 2000/01 started in phases and the culmination of this activity was the participation of the whole Liberec in the play-off first League, which gradually found its way into Svijanska Arena to 5,000 spectators.

The blog on heraldry